As seen in the Albany Times Union:

Coworking spaces are reemerging as one solution for vaccinated workers transitioning out of the pandemic who are eager to work somewhere other than their living room – but are unable to return to still-shuttered or reduced-staff offices.

There is also demand for memberships from people who are interested in simply working closer to home.

“The faucet turned on about two weeks ago and the phone is ringing,” said Tracy Metzger, owner of Albany’s first co-working space, The BEAHIVE. “I’ve really seen an uptick in the past 30 days in interest … It was really quiet all of last year, but now people want out of their house.”

Owners of coworking spaces across the region have reported a sharp increase in membership inquiries starting last month. In particular, private offices are in high demand instead of the once-popular open floor plan workspaces — a result of the pandemic and the hesitancy workers still have about being in close proximity to others, said coworking space owners.

“We’ve already converted two rooms that were being used for other purposes into private offices and they were rented almost immediately,” said Rod Dion, the owner of Harmony Coworks in Cohoes, which opened in October.

Troy Innovation Garage also built more private offices to accommodate the high demand. Before the pandemic, the coworking location saw about 75 people per day. During the lockdown, it only saw about 5 people a day – but now that number has increased to about 40 people coming in daily, according to the owner, Tom Nardacci, who also owns the coworking space Bull Moose Club in Albany. 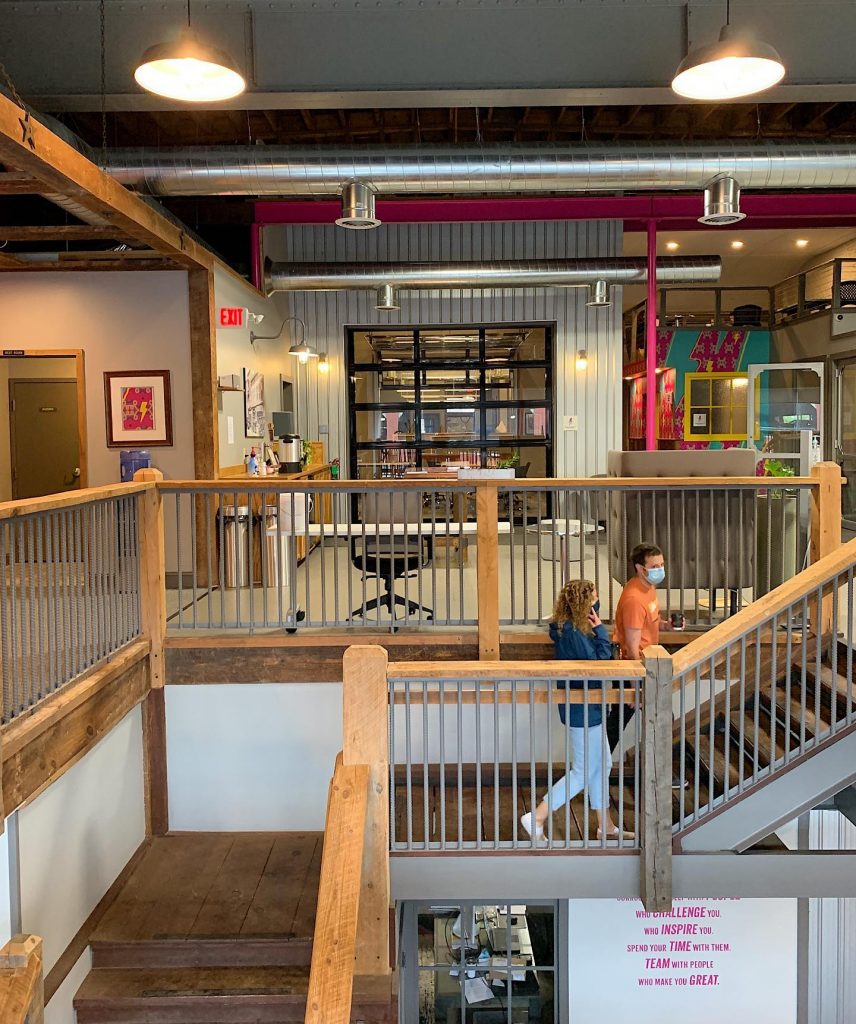 “It’s being established that you can be successful outside the office. That being proven did a lot of the groundwork [for us],” said Patrick Harris, president of CollectivEffort, a coworking space and marketing agency in Troy. “Before [the pandemic] you had to convince your employer that you could be successful. That being settled, along with the fact that it is getting warm and people have been in the house for a year … I foresee people showing up [here] more.”

Owners of coworking spaces are also hoping to provide the right compromise for workers who are no longer interested in commuting all the way to their old offices, but who still want to get out of the house for work.

“People who are choosing to work from home, why would you want to commute down the Northway to a city when you could just go to [a coworking location] that is already in your community,” Vorst said.

Coworking office owners in Troy are in conversation with city officials about how people joining their spaces will help continue the revitalization of the city’s downtown.

“Downtown Troy needs you back,” said Nardacci. “If you don’t come back to Troy right now, six months from now don’t expect it to be the cool place it was.”

Beyond the individualized worker, coworking spaces are starting to serve more corporations that are trying to figure out how to house staff, said Jeff Mirel, the executive vice president of The Rosenblum Companies, which opened HONE CoWorks in Albany last September.

“We are seeing a lot of corporate tenants that are floating portions of their team into the space and it is giving them the opportunity to bring teams back to work together which is a more productive outcome for them, but at the same time assess what the long-term office need is going to be,” Mirel said.

Troy Innovation Garage houses two software companies in its space, each company has about 20 desks for their staff. Nardacci, who owns and operates Aurelius Coworks which manages a total of three coworking spaces, is beginning to consult other companies about how they can best bring their employees back into either their own offices, or into other flexible office space options, including coworking locations.

“We’ve recently started to field a density of inquiries from larger companies looking for options to disperse their workforce for the first time,” Nardacci wrote in a blog post. “And we want them to know we built these communities for them, too. So, just like I know some people who left lower Manhattan never to return after 2001, I met many more new people who moved in and started to call it home, too. That’s on the horizon for our downtowns too.”

If coworking spaces will truly create a cross-industry community that substitutes for a traditional office  is still to be determined.

As much as coworking space owners hope to build such communities and often facilitate direct connections when they know one of their members is in need of a service, members seem to still be hesitant to socialize at this point, owners said, as many are just looking for a quiet place to work.

“The time has kind of expired having kids involved in Zoom calls and things like that. What was once cute and novel nine months ago isn’t so cute anymore,” Dion said. “A lot of members felt that it was time to get back to a professional setting.”

“Workers don’t interact a lot with others, but the opportunity is there,” said Jeff Goronkin, CEO of Urban Co-Works in Schenectady. “Most people are really coming in for a place to quietly sit down, get access to reliable internet, and get their work done,” Goronkin said.

Even if coworkers aren’t socializing as much these days, it doesn’t take away from the importance of an inspiring place to go to get your work done — something that for many people was missing during a year plus of working from home.

“For a lot of us being in a great, right, exciting, dynamic space really helps your sense of productivity, your sense of pride,” Mirel said. “We want to be a motivator not just a facilitator for our members.”